In this second part we're going to cover the setup of Vagrant as local development environment. In the end we'll learn how to - install and configure VirtualBox, Vagrant and Laravel Homestead - setup Vagrant in PhpStorm for (remote) PHP execution and debugging

And just as a reminder, the first part is over at Setting up PHP7 with Xdebug 2.4 for PhpStorm, the third at Setting up Laravel with PHPUnit on Vagrant in PhpStorm

Setting up the software

First of all, we're going to install a decent terminal on windows, because we will have to do some stuff on the command line and once you're working with vagrant you'll have to do this via SSH and it's just convenient to have a similar tool set available on Windows as on Unix (e.g. history search).

Cool, we now have a much prettier (and more powerful) shell to work with. I won't get any deeper into Git itself as there are much better introductions/tutorials on Git out there than I could possibly write :)

VirtualBox is the software that runs the virtual machine that we can use to run our code on. Using a virtual machine makes it possible to use the environment/infrastructure of a production system during local development and thus minimizes the error potential when finally going to production. When you're just starting out, those benefits probably aren't immediately clear to you, but once you begin to design whole systems with multiple components like databases, caches, web servers etc., this approach becomes incredibly helpful.

Technically, we wouldn't even need vagrant for our development as the "heavy lifting" is done by VirtualBox and once we've got our virtual machine up and running, we can start running code on it. But getting the setup right is actually not an easy task and requires manual involvement. We don't want that. We want a simple, reproducible, formalized way of defining our virtual machine. Vagrant does exactly that: It gives us a simple configuration language that fulfills those requirements and makes it even sharable with other team members to get them started quickly.

Vagrant will automatically be added to the PATH variable, so it can be called globally. To confirm that the installation was successful, run "vagrant -v", which should yield a similar output to this:

Homestead is a vagrant base box that is maintained by the creator of Laravel, Taylor Otwell. There's actually a chapter on Homestead in the Laravel documentation that does a pretty good job explaining how to set homestead up, so I'll keep this section rather short.

Since we've already installed VirtualBox and Vagrant, all we need to do is running vagrant box add laravel/homestead --box-version 0.4.4. That command will download the homestead box version v0.4.4 to (by default) ~/.vagrant.d/boxes or in Windows terms C:\Users\<Username>\.vagrant.d\boxes. You can change this location by setting the VAGRANT_HOME path variable as explained here.

Caution: We specified the concrete version because a simple vagrant box add laravel/homestead would download the latest version of homestead which is (at the time of this writing) v0.5.0 and contains the newest Ubuntu release 16.04. If you want to go with that version, make sure to also download and install the latest vagrant version (currently 1.8.5). It is possible ot have multiple versions of a vagrant box on your host machine, but it requires some additional setup to choose the right box. Please refer to this answer for further information.

Explanation: The homestead box can work with either VMware or VirtualBox and Vagrant leaves this decision to you. The error indicates that Vagrant doesn't understand which terminal (TTY) you are using and thus cannot display the options for you to choose from. 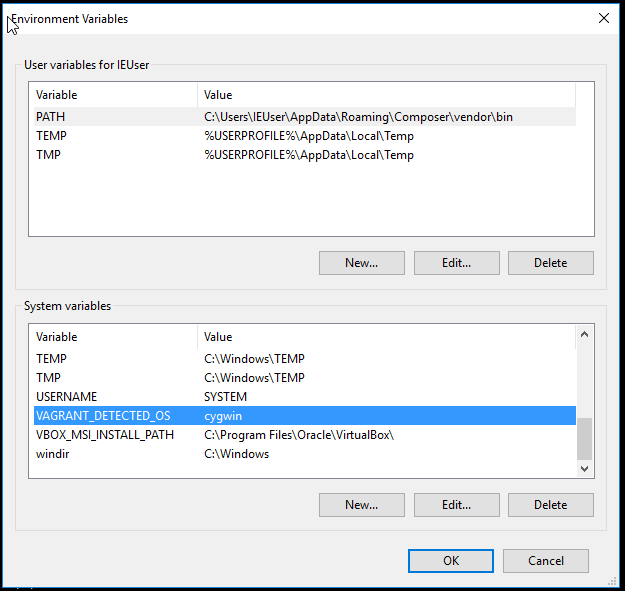 Open up a new shell and run vagrant box add laravel/homestead again. The output should look like this:

Type 1 and press Enter. This might take some time but should in the end look like this:

Let's make sure everything works as expected by following these steps: - create a new directory and cd into it $ mkdir test && cd test - Run vagrant init laravel/homestead to create an initial Vagrantfile with our new homestead box as base in the test directory $ vagrant init laravel/homestead A `Vagrantfile` has been placed in this directory. You are now ready to `vagrant up` your first virtual environment! Please read the comments in the Vagrantfile as well as documentation on `vagrantup.com` for more information on using Vagrant. The Vagrantfile holds the configuration options for the vagrant box, but we don't need to change anything in there for now (unless you have a device on your network that is occupying the 192.169.10.10 IP address, which is the default IP that vagrant will assign to the VM) - Run vagrant up to start the virtual machine $ vagrant up Bringing machine 'default' up with 'virtualbox' provider... ==> default: Importing base box 'laravel/homestead'... ==> default: Matching MAC address for NAT networking... ==> default: Checking if box 'laravel/homestead' is up to date... ==> default: Setting the name of the VM: test_default_1466931613297_29944 ==> default: Clearing any previously set network interfaces... ==> default: Preparing network interfaces based on configuration... default: Adapter 1: nat default: Adapter 2: hostonly ==> default: Forwarding ports... default: 22 => 2222 (adapter 1) ==> default: Booting VM... ==> default: Waiting for machine to boot. This may take a few minutes... default: SSH address: 127.0.0.1:2222 default: SSH username: vagrant default: SSH auth method: private key default: Warning: Remote connection disconnect. Retrying... Caution: The boot process might get stuck at default: Warning: Remote connection disconnect. Retrying.. and finally become ``` Timed out while waiting for the machine to boot. This means that Vagrant was unable to communicate with the guest machine within the configured ("config.vm.boot_timeout" value) time period.

If you look above, you should be able to see the error(s) that Vagrant had when attempting to connect to the machine. These errors are usually good hints as to what may be wrong.

If the box appears to be booting properly, you may want to increase the timeout ("config.vm.boot_timeout") value. ``` Trying to login from the VirtualBox GUI reveals: 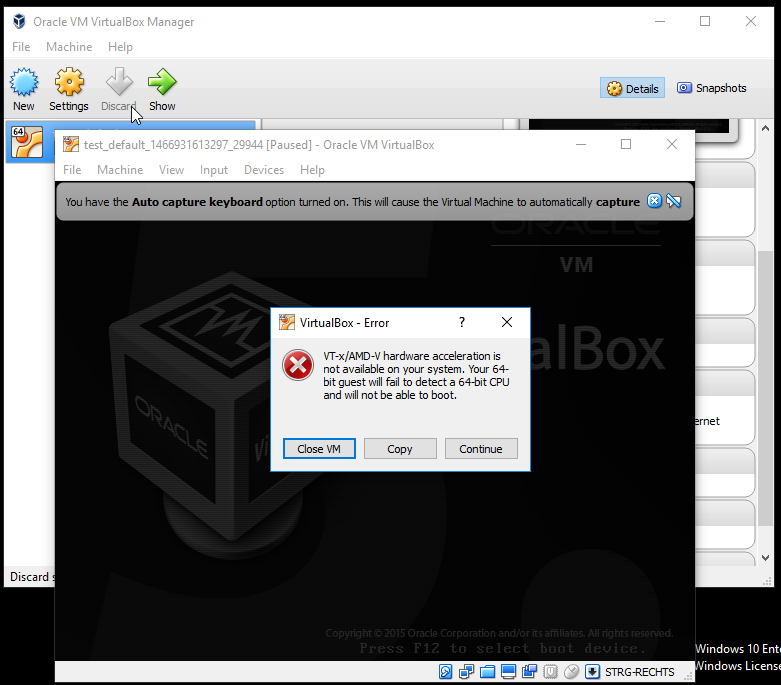 There's actually even a note in the docs:

Note: If you are using Windows, you may need to enable hardware virtualization (VT-x). It can usually be enabled via your BIOS. If you are using Hyper-V on a UEFI system you may additionally need to disable Hyper-V in order to access VT-x.

Please refer to the article How to Enable Intel VT-x in Your Computer’s BIOS or UEFI Firmware which does a great job explaining exactly how to enable the hardware virtualization. Note: the most easy way for me to get to the BIOS was simply to hit the WIN key and search for "Advanced Startup" and then clicking on the "Restart now" button. In the upcoming screens I chose Troubleshoot > Advanced options > UEFI Firmware Settings. If you still have problems to get into the BIOS, read on here

Note: So far, I used my own virtual machine for this tutorial so I could install everything "from scratch" to get the screenshots and a run into the *actual* problems that can occur. Unfortunately, I will now have to switch to my "real" laptop because currently it is not possible to run a 64-bit vagrant box within a virtual machine (yeah, talk about virtualiception ;)). Reason: I can't enable VT-x/AMD-x in the virtual machine. More in depth info on that problem can be found here and here.

Congratulations, you've successfully overcome every obstacle and are now the proud owner of a working vagrant homestead setup.

Configuring PhpStorm to use the vagrant box

Setting up PhpStorm to work with your newly created vagrant box can be a little tricky, as the process is not really that straight forward. But in the end it's just a matter of "knowing where to click" (and having a little bit of background info on what's happening behind the scenes is also helpful ;)). And it will not work as expected, but I think it's still helpful to explain why that is the case and how to work around it.

PS: There is also a Working with Advanced Vagrant features in PhpStorm tutorial. Although their approach is a little different, so take it as a nice to know :)

Whoop whoop, that's it :) Oh and because homestead comes pre-installed with Xdebug, we could even set a breakpoint and halt the execution within the virtual machine - now is that something or what? Before we go on let's shut down the VM by running vagrant halt on the host machine. This will simply shut down the VM but all changes we made to it stay in place. If you want to make a completely fresh start, use vagrant destroy and confirm that you really want to "destroy" the VM.